How a Steam Engine Works

How a Steam Engine Works

When water is heated, it turns into a vapour called steam. As the water becomes steam, it expands. But how is this used to move a locomotive?

The first step is to create heat. Coal or oil are used as the fuel. The coal is carried within the tender of the locomotive, and is shovelled into a section called the firebox, which has grates at the base, by an individual called the fireman. The firebox is accessed from the cab of the locomotive. By spreading the coal throughout the firebox, the fireman creates an even level of fire over the grates. Air flows upwards through the grates which allows the coal to burn even hotter. The gas released from the coal flows forward using a number of tubes, or flues, to the front of the locomotive. 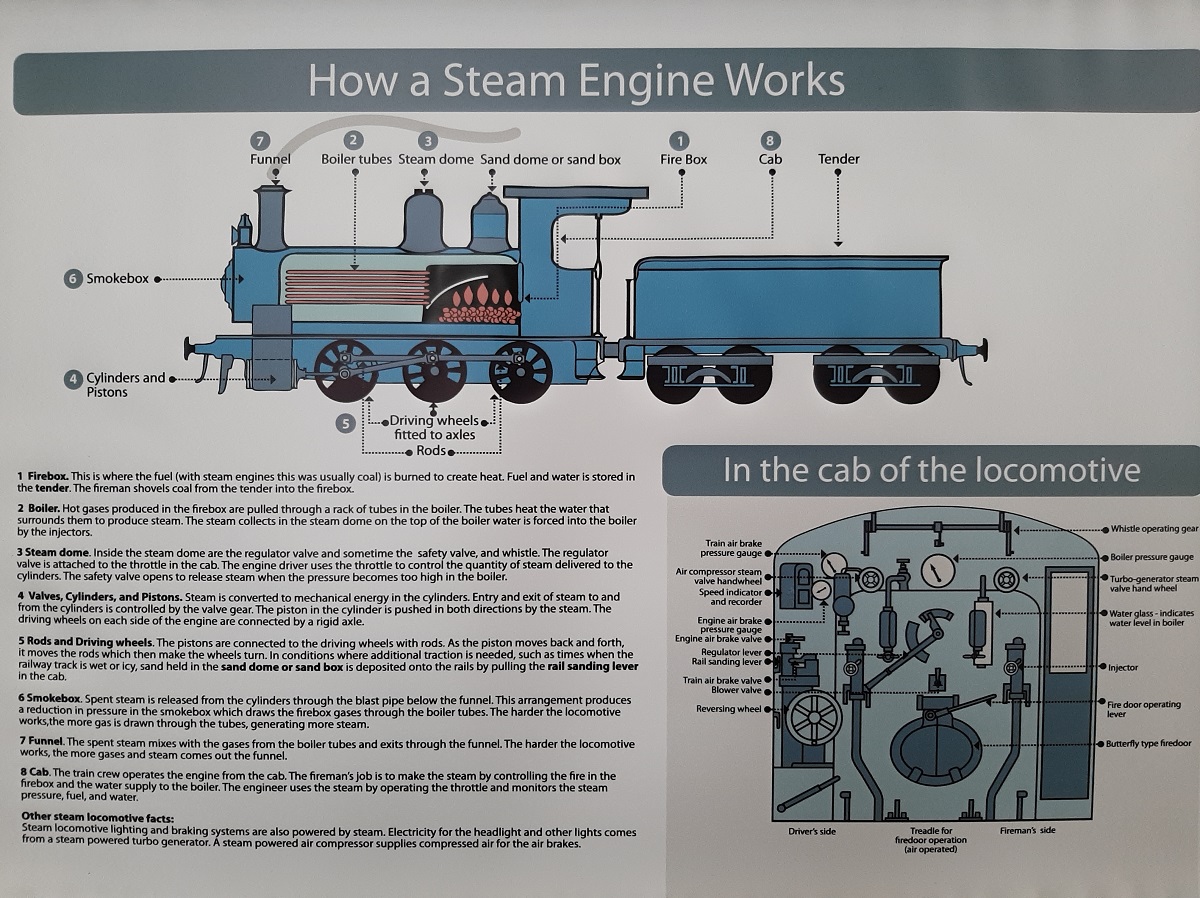 Whilst managing this, the fireman also needs to monitor the level of water. Water is carried in a separate section of the tender, which is carried to the outside of the firebox by using a device called an injector. The heat from the coal turns the water into steam which then rises to the top of the boiler. As the boiler is of a set size, the expansion of the steam as it is created generates intense pressure.

Steam is gathered at the steam dome, at the highest point in the boiler. The engine driver on the locomotive uses a throttle in the cab of the locomotive to control the level of steam being transferred to the pistons, through the regulator valve. A lever in the cab for the throttle opens and closes the valve in the steam dome. There is also a safety valve here, which can be used to release steam when the pressure gets too high.

Steam is passed through an item called the valve gear which controls the allowance of steam into the cylinders. When the steam is inside the piston, it expands and can push it in both directions. The steam is admitted to each of the sides of the piston to keep it under constant power. In the cab, a lever allows the engine driver to maintain the action of the valve gear, which in turn controls the speed of the locomotive, and whether it is moving forwards or backwards.

The pistons are connected to the driving wheels with rods. As the pistons move, the rods also move, causing the wheels to shift. On occasion, there is not enough traction to get the wheels moving, particularly if the track is wet or iced over. When this occurs, sand from the sand dome is released by pulling a lever in the cab, and it drops onto the tracks.

The National Railway Museum has visual representations and a few recordings about steam locomotive boilers, so come for a visit if you wish to to learn more.